The gods are dead, the New World Order is up and running, and trans-dimensional portals are interrupting morning commutes. Welcome to the city of Polis. Revenant World is a tabletop role-playing game where you and a group of friends will take on the roles of Vagabonds-- rebellious adolescents from Polis just doing their best to navigate the treacherous halls of high school as well as the alien worlds of the Microcosmic Plane.

What could go wrong? 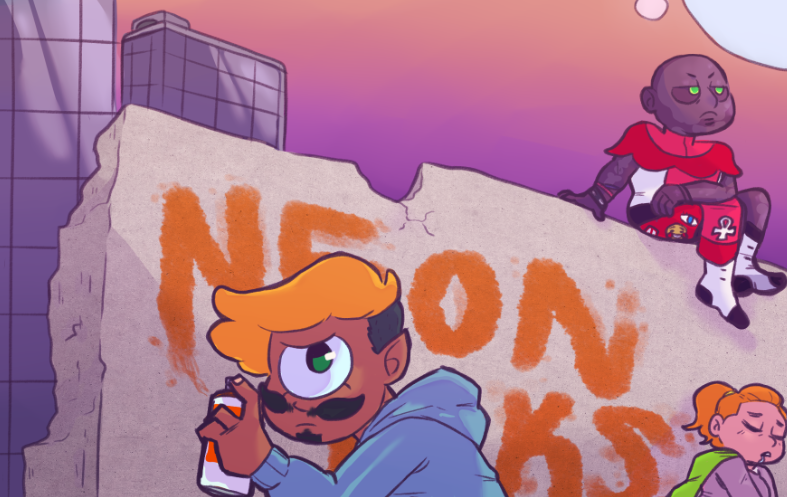 The Synthesis crafting system supports customizing a character with unique weapons, tech, and gear that you work together with your GM to create, and the Class system with its 10 Jobs (Paladin, Medic, Berserker, etc.) and 12 Arcana (Storm, Space, Luck, etc.) cranks the customizability to eleven.

The core actions of the game are combat-focused, with a list of ATK and DEF Maneuvers constantly giving you meaningful choices in dynamic battles with otherworldly threats. You always feel like you're actively fighting against a deadly adversary, not just locking in your stock standard "attack" command each round.

GMs are given a colorful suite of diverse Monsters, as well as a pool of additional traits and abilities they can use to easily customize enemies to their liking.

When they aren't fighting Monsters, your Vagabonds are hanging out in cafes, blowing off homework, and constantly running from the vigilant law-enforcement officers of the Worldguard. The influence of YA fiction doesn't stop at the worldbuilding. Mechanics are woven into the game to push you toward that teen-adventure feel.

A system called GRUDGE and BOND encourages melodramatic angst by offering mechanical rewards for starting fights with party members and quickly resolving them.

You gain access to a broader array of abilities by becoming infatuated with powerful figures and their Factions or by building social circles in Downtime, once again drumming up the high school adolescent vibe.

The health and Ordeal system emphasizes the dire toll these adventures can take on our heroes both mentally and physically, supporting the theme of constantly being in over your head. 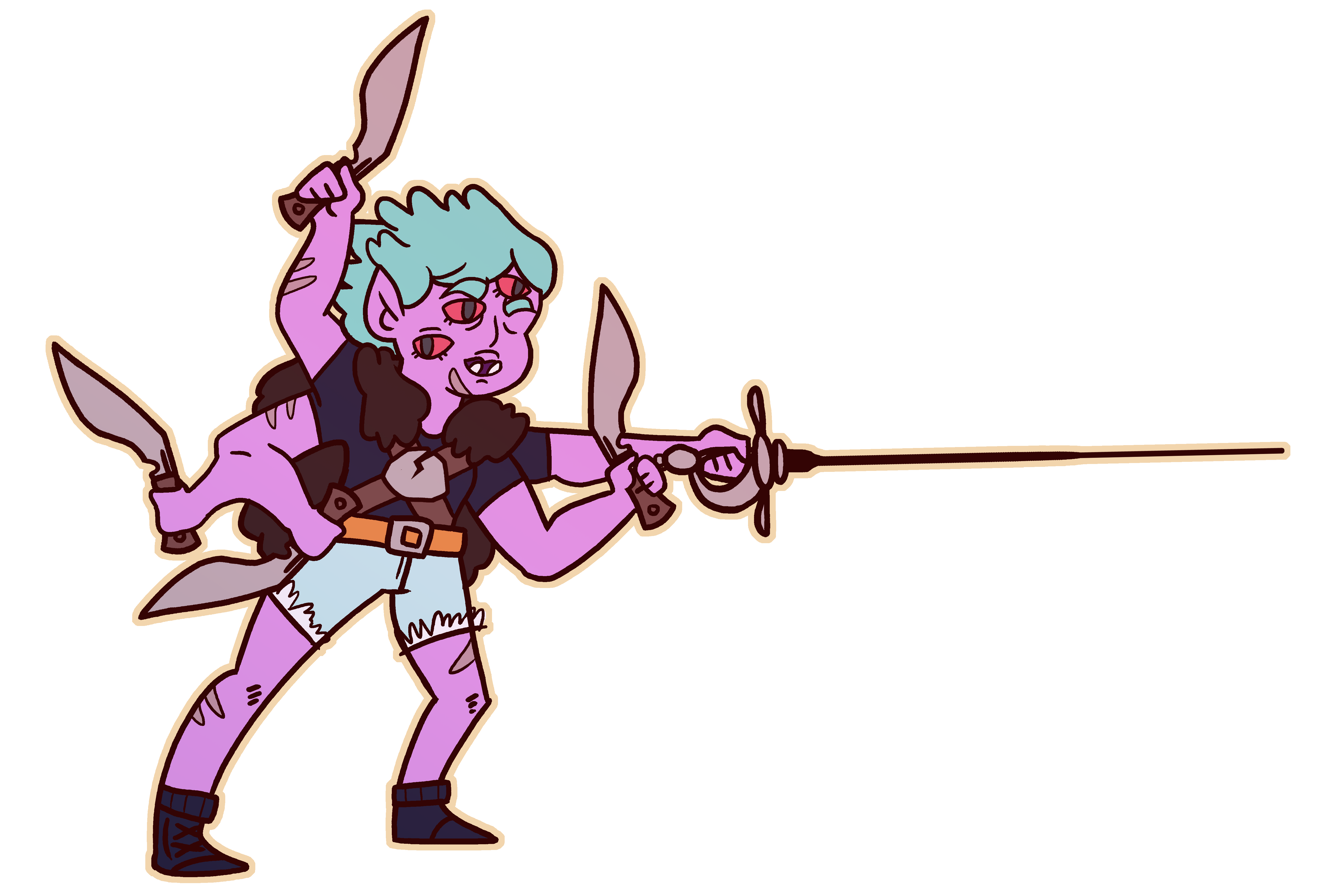 The game itself has a playstyle that not only fosters but rewards creativity as well as systems that allow you to truly build your character and your story the way you want to. I also found the rules to be very easy to understand which was really nice as a new player.
-Amazon review

This perfectly captures what you were trying to make, and is more Homestuck than Homestuck itself.
-Reddit reply

I run a weekly campaign of this with a group of friends and just wanted to say its one of the best tabletops we've ever played. The setting is so imaginative and the mechanics are just crunchy enough while maintaining a strong sense of fluff. We have had a blast playing Revenent World and we'll have more.
-DriveThruRPG discussion

To play, you'll need the corebook and print resources (both included in this download), 3-5 people, a set of polyhedral dice (with some extra d6), and some pencils. The 238 page corebook contains rules and tips for players and GMs, dozens of full-color illustrations, and two sample scenarios to get you started in the world of Revenant World.

Be sure to check out the sequel: Our Minerva, a GMless, slice-of-life tabletop roleplaying game about the athlete children of undead gods. 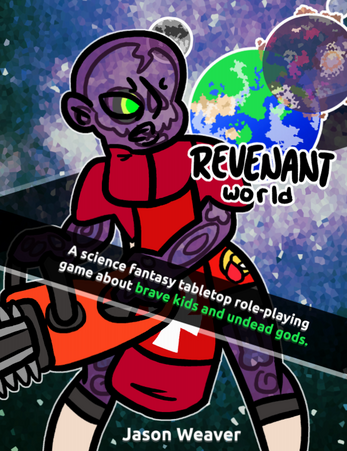 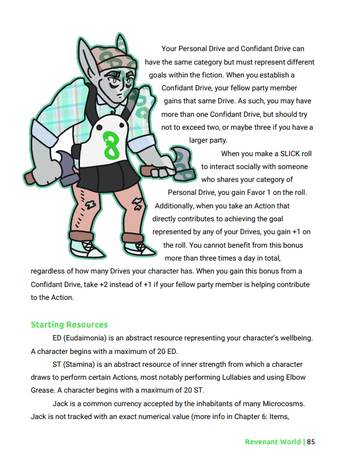 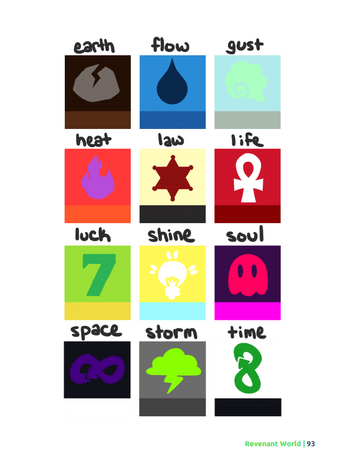 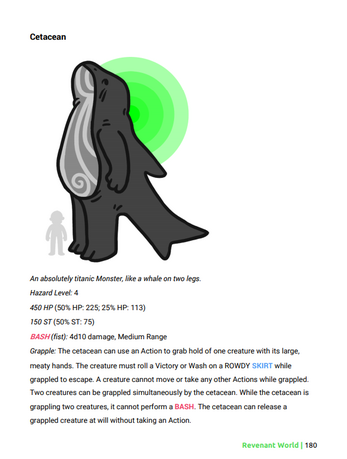 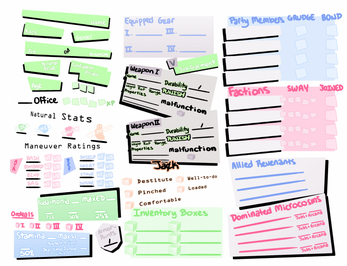